Today we continued to pose and program the robots, and create the art for the stage.  At this point in the program, the kids know their way around the robots.  They are gentle when they manipulate the robots, and are comfortable programming them to deliver their lines.

Each block of text (along with the movement) will be stored in its own timeline.  Once we have all of the individual timelines for a robot, we will create the final program for that robot.  Some of the roles were easier to put together than others.  For example, “Christopher” and “Denise” will be playing virtual pong throughout the skit, so their movements involve an infinite loop of random arm movements that look like they are hitting a ball back and forth.  They have a few lines of dialogue in the skit, but we didn’t have to create any deliberate movements outside of the pong gestures.

“Daniel” will be describing outdoor sports (mentioning football and archery, and then describing how to play baseball in more detail).  That series of movements took some effort to build, and the final result was outstanding.  “Gini” and “Bobbi” are the robots visiting from Minneapolis.  They will be locking their convertible car, and trying to figure out where to go for the Robot Theater Summer Camp.  They will be walking up to the other robots to ask for help.  “Gini” will be describing how to make a dump cake, and “Bobbi” will be talking about the winter sports that she plays.  “Alberto” will go into detail about gardening.  The kids in the camp created all of this dialogue and movement. 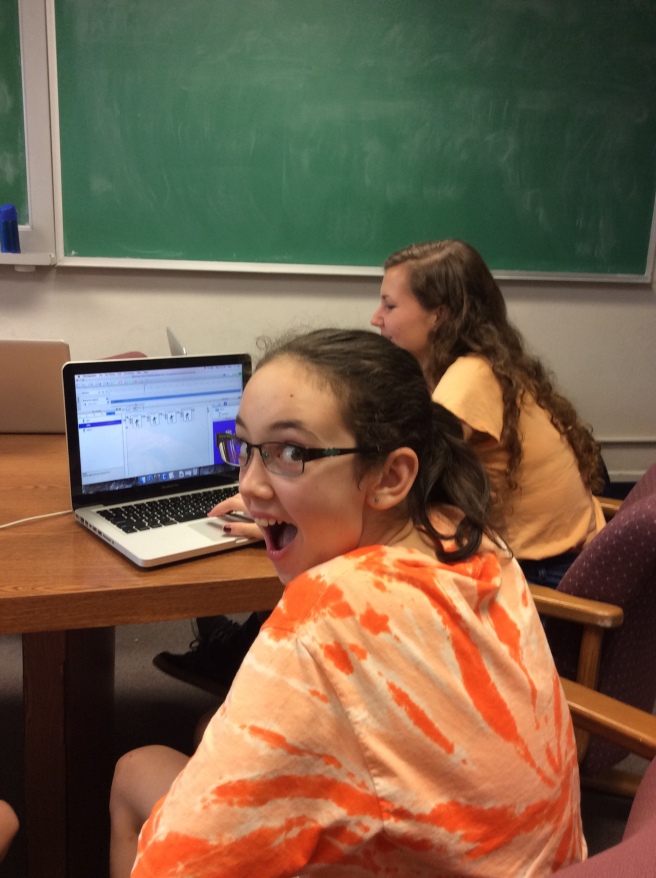